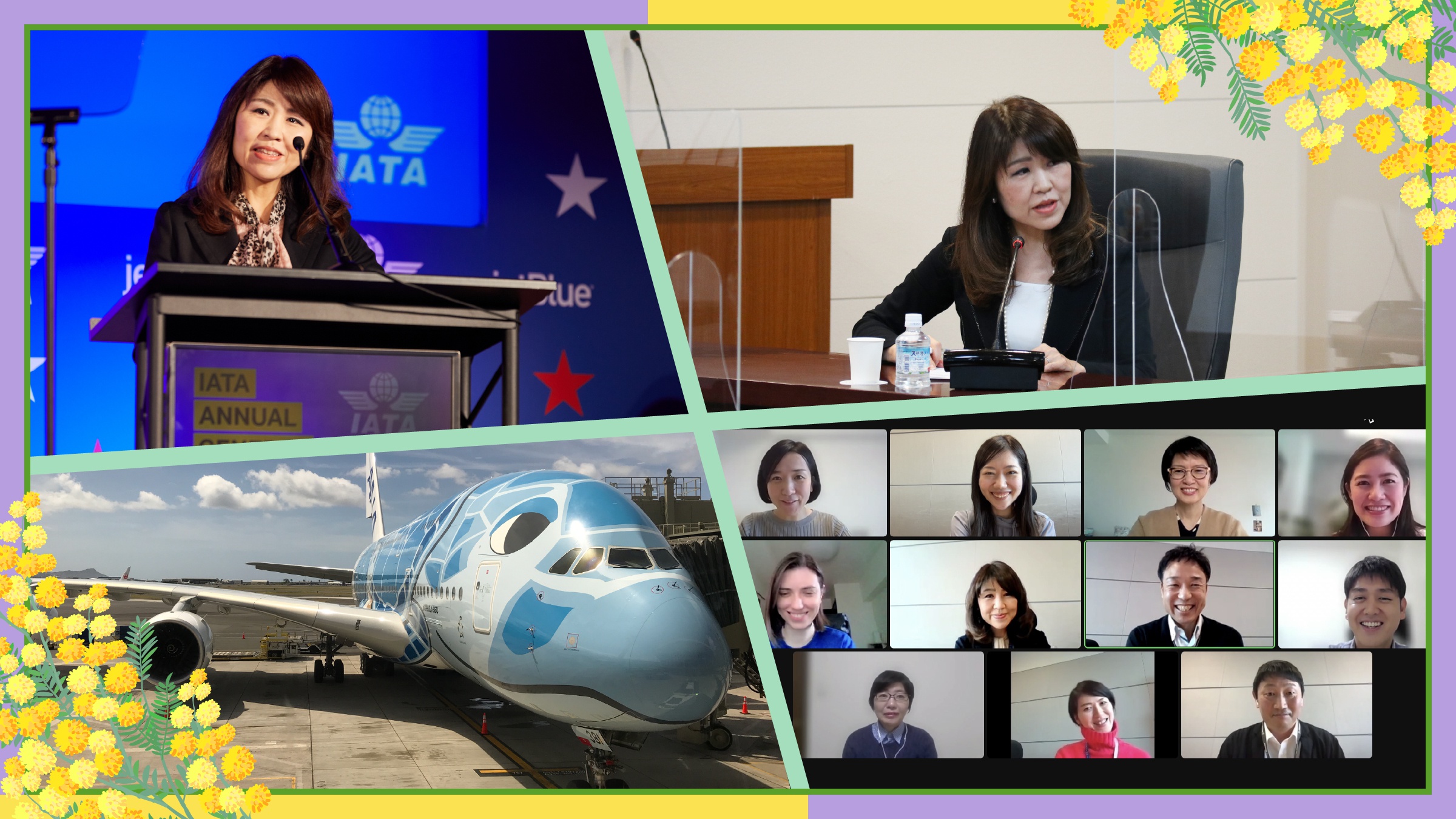 March 8 is International Women’s Day, an occasion for people around the world to celebrate the social, economic, cultural and political achievements of women. Continuing on last year’s 2-part series, we spoke with Jun Taneie, ANA Group Executive Vice President and Director of Diversity & Inclusion Promotion, to learn more about the ANA Group’s vision of bringing gender balance to a traditionally male-dominated industry.

Q: Tell us about the current situation and challenges the ANA Group faces regarding gender equality.

Within the ANA Group, there are 38 companies with specialized tasks and missions, including flight operations, airport handling, maintenance and marketing & sales. We have a diverse group of people that are committed to working together and delivering a superior travel experience to our passengers. Within each company and department, there are flexible and customizable Human Resource systems to support employees as they make their life and career plans. We also offer a variety of career-advancing programs. 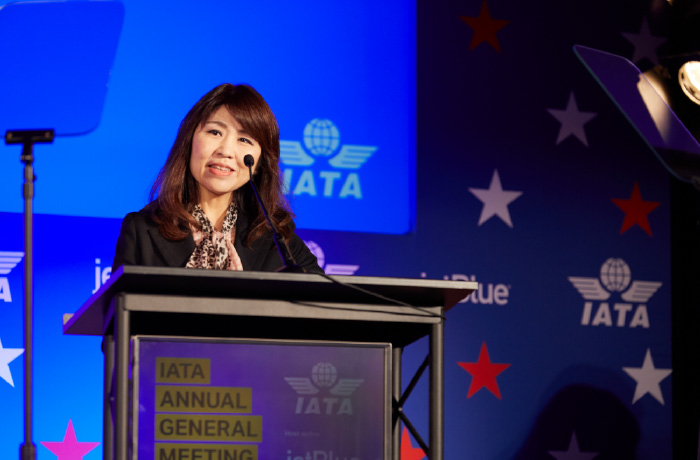 Meanwhile, we face two significant challenges as we work to achieve gender equality: 1) the ratio of female employees in upper management, decision-making roles is low (currently 9.7%); and 2) some technical departments, such as maintenance, are still predominantly male.

We are collaborating with our internal HR department and Labor Administration department to overcome these challenges, and remain committed to implement policies necessary to continuing to work to improve our personnel management systems. This includes offering more flexible work environments and addressing the unconscious biases against female employees.

While we make these changes, we are emphasizing four key strategic actions: 1) align with upper management; 2) align with employees and their workplace; 3) visualize progress and goals quantitatively; and 4) effectively communicate the progress internally and externally.

Q. Why do you think women are underrepresented in upper management?

Japan’s Equal Employment Opportunity Law for Men and Women was not enacted until 1986. However, even with the equal employment law, women often found it difficult to keep working after getting married or having children. I believe that is why we have a smaller ratio of female employees in their late 40s and early 50s today.

As you may be aware, Japan was ranked 120th among 156 countries by the World Economic Forum’s Gender Gap Report in 2021. It is still considered a cultural norm for women to stay home while men work outside the home. However, this trend is changing, particularly among younger generations through the effects of this cultural shift have not yet been fully realized across Japan and as a result we see fewer women in upper management positions. Naturally, this has impacted the ANA Group as well even though the majority of our 8,000 cabin attendants are female.

Q: Why do you think it is important to have a good gender balance in decision-making roles?

This isn’t just about having a gender balance, it’s about the importance of having a diverse group of people who are able to make smart decisions. Our customers are diverse. Some have disabilities and others come from different countries and cultures. In order for the ANA Group to remain competitive, we should not rely on one homogeneous perspective to make decisions. As an airline, it is crucial for us to have high crisis response capabilities and having multiple perspectives is an asset in achieving our goals as a company.

Q: Tell us about your history with ANA.

I joined the company in 1989, which was three years after ANA started operating flights internationally. We were entering a new era at the company. None of us were experts in the global market, but we learned as we went. That kind of company culture was very appealing to me. I’ve always wanted to grow with the company, and ANA Group was the perfect place to learn and grow.

For a while, I was involved in international flight booking and sales, after which I transferred to the Revenue Management department. Since then, I have worked at the Alliance department, Investor Relations, and Rakuten to lead an online travel-related joint venture assignment. After returning to ANA, I was with the Digital Marketing and Advertising departments.

Q: What are some of the most memorable projects in your career with ANA?

When I was with the Revenue Management department, I requested to be transferred from the inventory management team to the pricing team because I wanted to learn analytical skills, such as demand forecasting and marketing framework, which were new to the company at the time. I was given an opportunity to learn how to read numbers, think quantitatively and gain valuable expertise. This experience made me more confident in my contribution to the company.

Secondly, when I was a member of the joint venture company at Rakuten, I left ANA and worked at the Rakuten office for three years. It was a 180-degree difference in terms of corporate culture. At Rakuten, they place an emphasis on agility, while safety is the top priority at ANA. The experience was a valuable lesson and taught me what ANA excels in and how it can improve moving forward.

Q: Have you experienced any disappointment as a female employee at ANA?

My first job at the ANA headquarters was to assist my colleagues. I helped with expense reports, cleaned their desks and made them tea. My department director excluded me from attending weekly team meetings. He seemed to think it was unnecessary for me to attend even though I was a member of the team. It was disappointing.

Overall, I believe we have maintained the mentality of innovators. ANA continues to embark on new ventures, even outside the aviation industry. With that said, when we became the largest airline in Japan, we gained a reputation that we needed to defend. 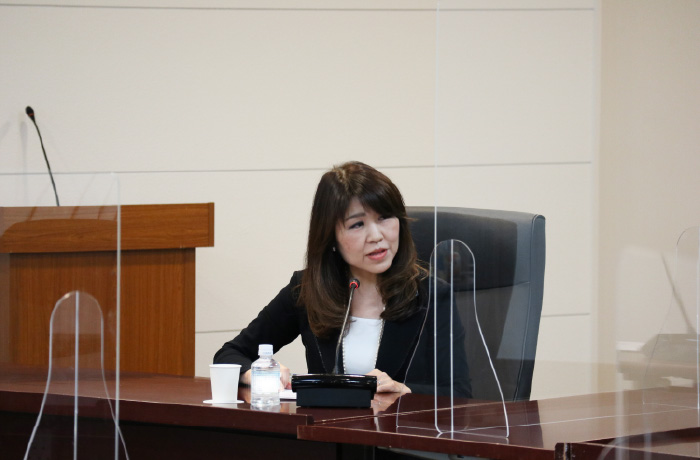 In addition to the gender gap, I often think about the generational gap at the ANA Group. We have good HR systems that employees can take advantage of, but I often ask if we are paying enough attention to what our younger colleagues are thinking within our workplace. I hear many of them say they do not wish to be promoted to managerial positions as they prioritize their work-life balance more than previous generations. I wonder if they feel stressed by the pressures of high-profile work and instead prefer to play a more supportive role. In the past, I feel ANA was more willing to let younger employees try new things without fear of failure. We must value the input of our young colleagues because we need them to evolve our company forward with new ideas, processes, perspectives and goals.

Q: As a female executive, how do you maintain a work-life balance? Do you have any messages to future female managers, directors and executives?

In my current position, I have to say I am not separating my work from my private life. Work is pretty much on my mind even when I am not working. Part of my involvement in D&I-related projects is thinking about how employees like to work and what kind of workplace the company should offer; it overlaps with what type of life each employee wishes to have. It goes beyond what we do at the office. For this reason, I am constantly trying to receive input from what is happening and what is being talked about in society.

With that said, I try to spend my personal time thinking about positive and productive work. I don’t reflect on negative work-related experiences because I do not want to bring that energy home to my husband.

For future leaders of ANA Group, I would like to say that taking on managerial roles does not simply mean a bigger workload or managing people. I believe it is fun to think about what values you can bring to the company. You have the opportunity to design your work or team in a way that works best for you and you believe in.

I think it is a good exercise, even outside the ANA Group – to think about what you want your ideal work and career path to be. The ideas you come up with for yourself will broaden your world.