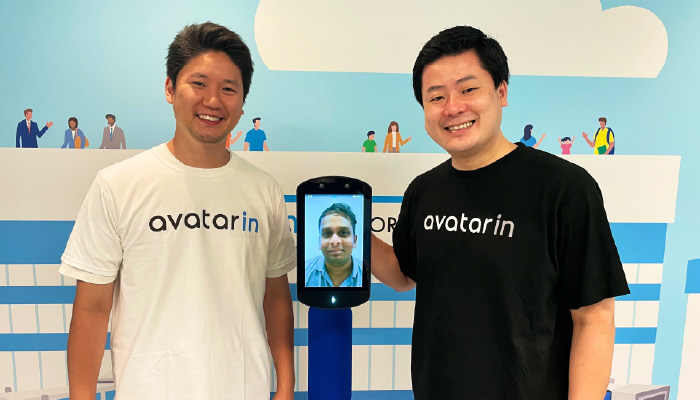 CEO Akira Fukabori and COO Kevin Kajitani, the founders of avatarin, are the subject of a new case study by Dr. Linda A. Hill and Emily Tedards of Harvard Business School.

We spoke with Fukabori and Kajitani, who are both former ANA employees, to learn more about avatarin’s mission to accelerate the development, deployment and research of robotic avatars. We also inquired about how ANA has influenced their work and the progress that they have made as a new venture launching in the midst of a global pandemic.

Q: Tell us how avatarin was founded.

“Our backgrounds are as aerospace engineers. When we represented ANA at the XPRIZE Global Visioneering Summit in 2016 to discuss which global challenges we should be tackling next and how, our idea was to create teleportation,” said Fukabori. “avatarin is the world’s first teleportation service as it is able to instantly transport your consciousness and presence.”

“Our goal was not to start a company, but to make a positive impact on society using this technology,” said Kajitani. “But we realized that in order to achieve this, we would need a focused team with a specialized skill set and be able to make decisions quickly. This is why we proposed to spin-out from ANA to start avatarin.”

Q: What is avatarin’s mission?

“Our mission as a company is to leverage robotic avatar technology to give everyone around the world – all 7.5 or 8 billion people – access to mobility,” Kajitani said. “We often think about mobility as being a basic right for people around the world, but the reality is many are constrained by physical limitations or geographic location.” 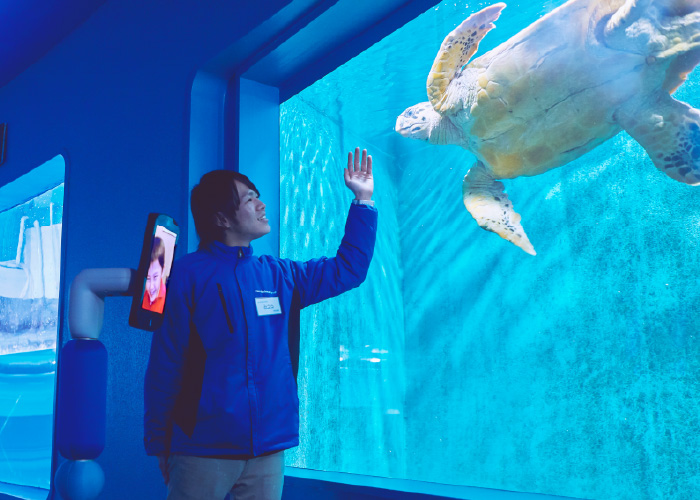 Kajitani explained that mobility is not only about going on vacations or business trips, but is about being able to go anywhere in the world at any time.

The company has developed an avatar robot called “newme,” that allows an operator to transport their consciousness and presence to a remote place where the device is located in real time.

Q: Will you sell newme as a transportation tool?

“Our business model is similar to that of an airline. Our core business is not to sell robots. We will install these robots in various locations and allow our customers to teleport themselves to these destinations. This model requires network planning, revenue management, fleet management and alliance strategies. So there are a lot of things we can learn from the airline business,” Fukabori said.

“Although we are an IT service, we are bridging the digital world with the real world. In this sense, our business requires more knowledge of real-world services than a typical IT company would require. We are leveraging cutting-edge technology, but our main business is not selling the technology but rather providing a service built on top of it,” said Kajitani.

“Since we want to build a global infrastructure, it does not make sense for us to sell robots to one user at a time. We want to enable a large number of users to access and utilize each robotic asset. In order to do that, we need to incentivize the deployment of robots and leverage a sharing economy-type model.”

“As humans, we naturally recognize objects that move which is why we are able to feel a person’s presence through the newme,” said Fukabori.

And the ability to move around creates independence. 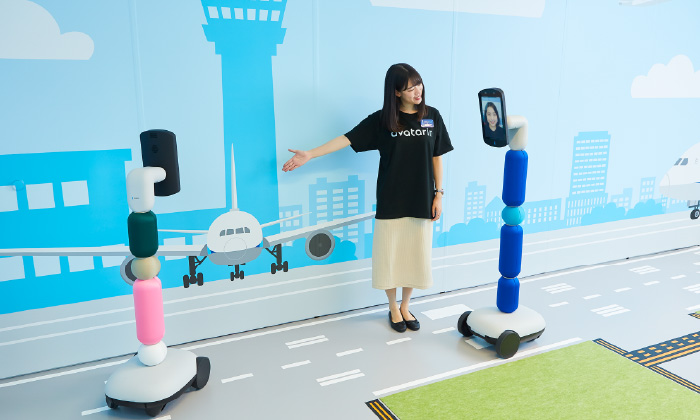 “If you can more around and look at what you want to see then you don’t need somebody on the other end to support you,” Kajitani said.

Kajitani also stated that being able to explore a remote location independently can be a source of inspiration. If you see something that interests you, you can ask questions or take a path you did not expect to take.

“This element of serendipity and curiosity is what drives insights, creativity and new ideas. So I believe that being able to freely and independently move around in multiple remote locations around the world is a gamechanger,” he said.

Q: How does the current newme service work? 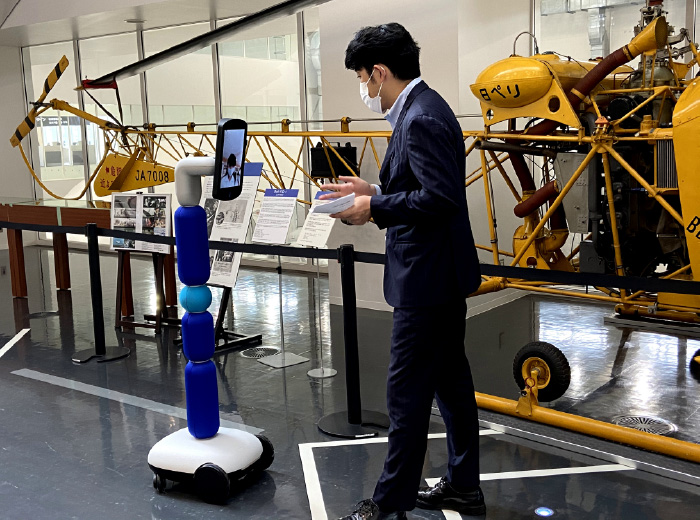 The newme robot being shown around the ANA Blue Base.

“We are placing robots in museums, stores and other popular destinations so that people around the world can access and experience those facilities,” Kajitani said. “We can connect businesses with people who live far away and also connect them with new customers who are unable to go there in person.”

“It is important to note that our goal is not to replace ‘real’ transportation. We believe that the best form of transportation is to actually go there in person,” Kajitani said.

“We think about real mobility as a premium form of transportation. Robotic avatars will give us a new way to more frequently and casually connect to more places around the world. And it’s sustainable since all you need is an internet connection,” Fukabori said. “It is a new way of thinking about how we travel.”

Q: How else can robotic avatar improve our lives?

“The original concept behind all of this was how can we solve the problem of distributing human skill sets. Human skill sets are siloed in large cities and urban centers, which means people who are living in rural areas or remote parts of the world simply cannot access these critical resources,” Kajitani said. “We believe robotic avatars will be the solution to democratize human resources and skills.

Q: How has the pandemic impacted your business?

“We did not create this service or launch our company because of COVID-19 as we have been working on this initiative since 2016. But launching the company in the midst of a global pandemic that has restricted human movement has been extremely thought-provoking,” Kajitani said.

“I believe that COVID-19 has increased global awareness of the importance of mobility and the limitations of existing mobility infrastructure. The pandemic has also helped to change the global mindset around the use-cases for remote avatar mobility.” 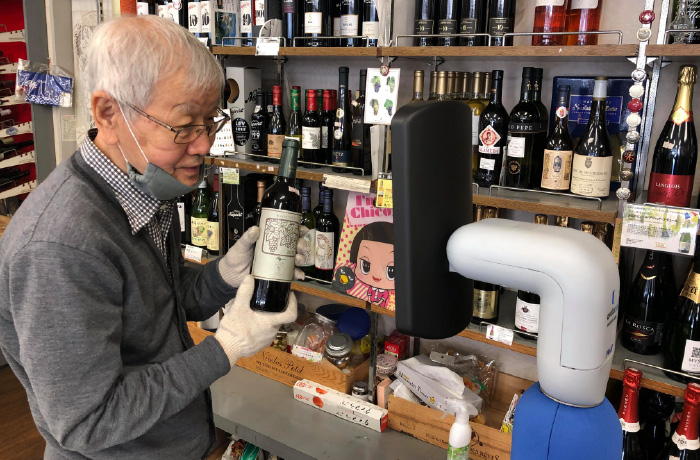 The robotic avatar can take you to more places, instantly without you having to risk your physical safety. People now recognize and understand the need for innovations like newme.

“There is no one asking us what this service is about anymore,” Fukabori said.

Although the avatarin service is currently only available in Japan, many users outside of Japan have already begun to access the service. After launching the site, avatarin’s first user was actually a Japanese national living in the UAE.

“Another Japanese national living abroad who used our service commented, ‘This was first time I have been able to come home in a long time.’ This comment about being ‘home’ via avatar really summarizes what our service is all about. And being able to provide this type of experience to users during the pandemic has been very rewarding,” Kajitani said.

Q: Why do you think ANA Group decided to invest in avatarin?

“If we look at ANA’s history, tackling this type of challenge is very aligned with ANA’s DNA, which has always been about trying new things to benefit society. Although our concept was certainly more extreme than others in the past, I think it is still in line with the values of ANA and we always talk about how we are carrying on the airline’s DNA,” said Kajitani.

“The ultimate goal of the founders of ANA was not to operate airplanes, it was to connect people to make the world a better place. Helicopters were one tool, as were propeller and jet aircraft. Avatars are yet another tool. The common thread is that each of these tools have increased the number of people who can connect over longer and longer distances in shorter and shorter amounts of time.”

“ANA has supported us and our vision,” said Fukabori. “We aim to grow avatarin together with ANA to democratize mobility around the world.”

Ultimately, the duo believes there is synergy in this partnership.

“There are so many skill sets required in the airline industry and it’s like a gigantic machine with many moving parts working in perfect synchronization,” Kajitani said. “Each employee needs to work together as a team for the overall operation to work. Just likes airlines work to optimize user experience and aircraft utilization, our company will need to focus on these areas as well.”

“We believe working together with ANA is the best way to drive positive change in the world quickly. I think the opportunity is a huge win for ANA as well.”

“If we think about how quickly devices like smartphones have been adopted around the world, I believe in 10 years, avatars will be ubiquitous. They will be in people’s homes, museums, stores, shopping malls, hospitals, and even in space. And I think they will be a normal and central part of everyone’s lives,” Kajitani said.

“It is like the famous photo of New York taken in 1900,” said Fukabori. “A single Ford automobile on 5th Avenue in a sea of horse-drawn carriages. Another photo was taken at the same location in 1913. This time, there was only one horse carriage in a sea of Fords. In 13 years! That’s the kind of change we are expecting in the next decade.”