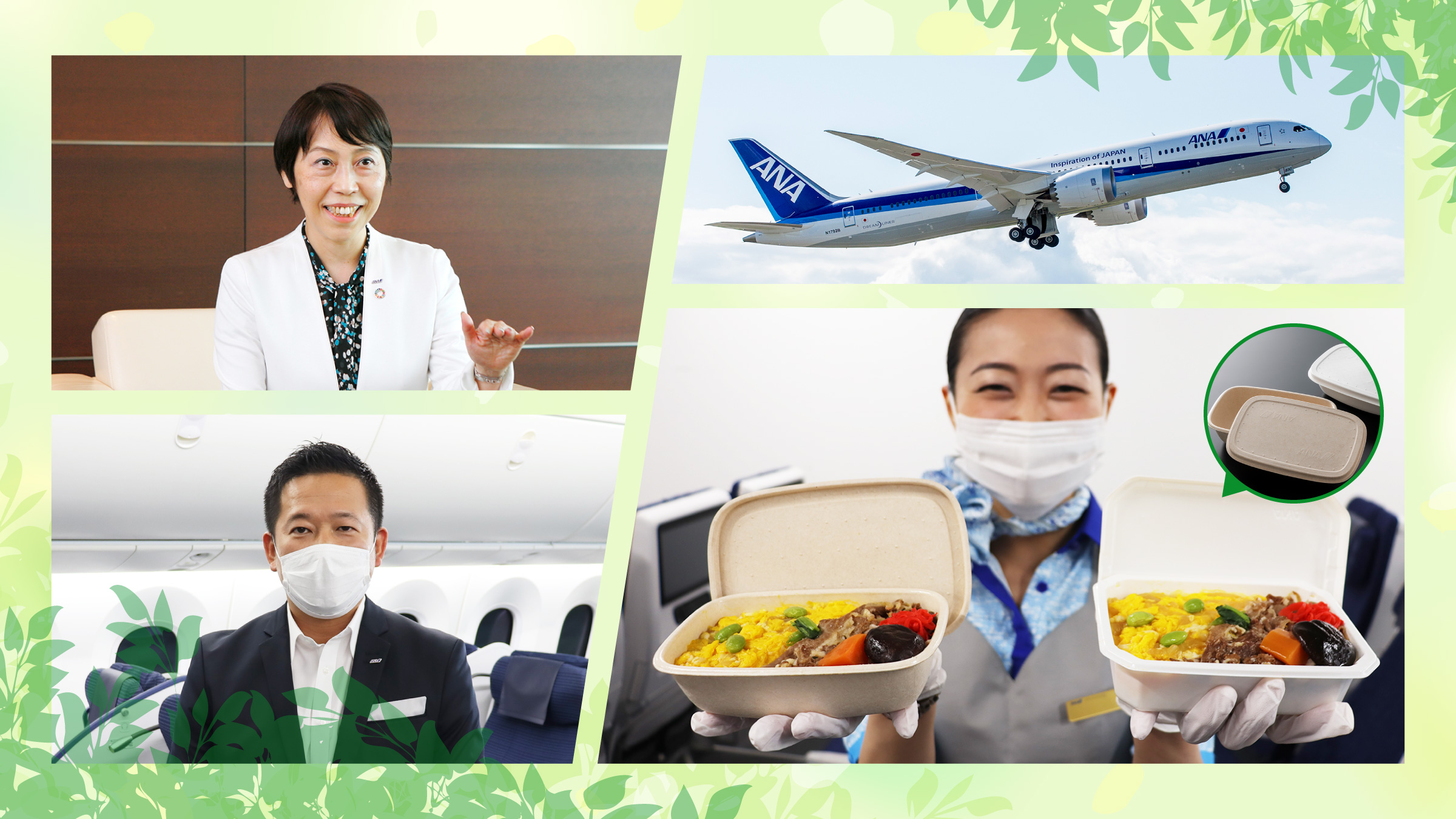 June 5th marks World Environment Day, a day for encouraging worldwide awareness and action to protect the environment for future generations. In Japan, the entire month of June is dedicated to this commitment. To celebrate this month, we spoke to Chikako Miyata, senior vice president and director of Corporate Sustainability, about her vision for how the ANA Group will continue its promise to environmental causes.

In April, the ANA Group pledged to become carbon neutral by 2050, upgrading its previous goal of reducing its carbon emissions from aircraft operations by 50 percent (compared to the 2005 level). 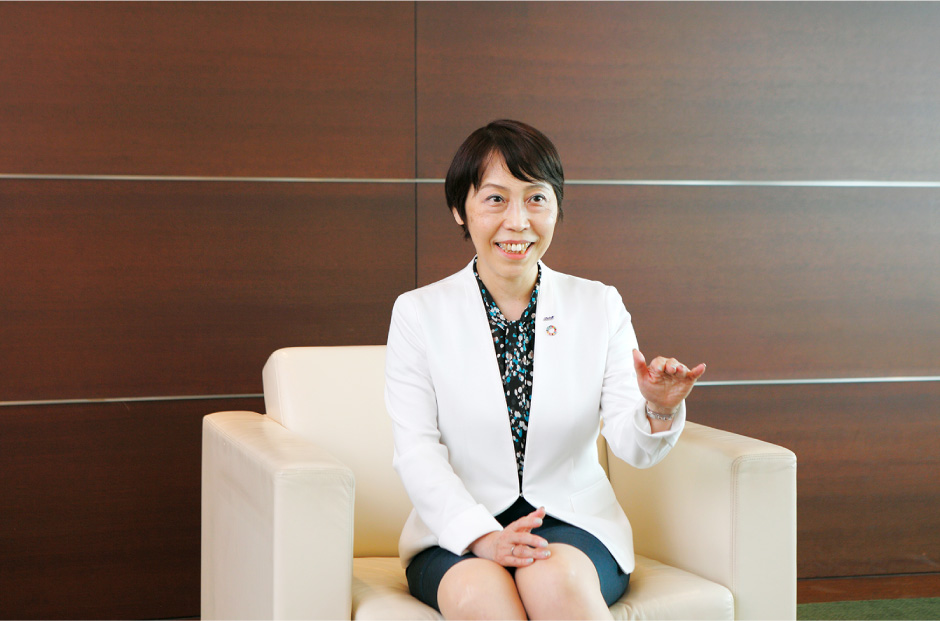 *Picture was taken with COVID-19 safety procedures in place.

“As an airline, ANA has always been conscious of the fact that aircraft generate carbon emissions,” Miyata said. “We would not be accepted by society if we didn’t face our responsibility.”

Miyata acknowledged the impact of COVID-19 as the pandemic reduced operating flights to a fraction of what they had been. While a smaller number of aircraft in the sky contributed to a drastic, albeit temporary, reduction of carbon emissions worldwide, Miyata believes COVID-19 had a more permanent effect on people’s mindset resulting in what is widely referred to as a “green recovery.” We saw how quickly our “normal” lives became paralyzed by an uncontrollable force.

“By experiencing the pandemic, the world had a preview of how it will be if we fail to achieve our ESG goals,” she said. “Society has been shifted in a way that provides support and encourages working toward more ambitious goals.” 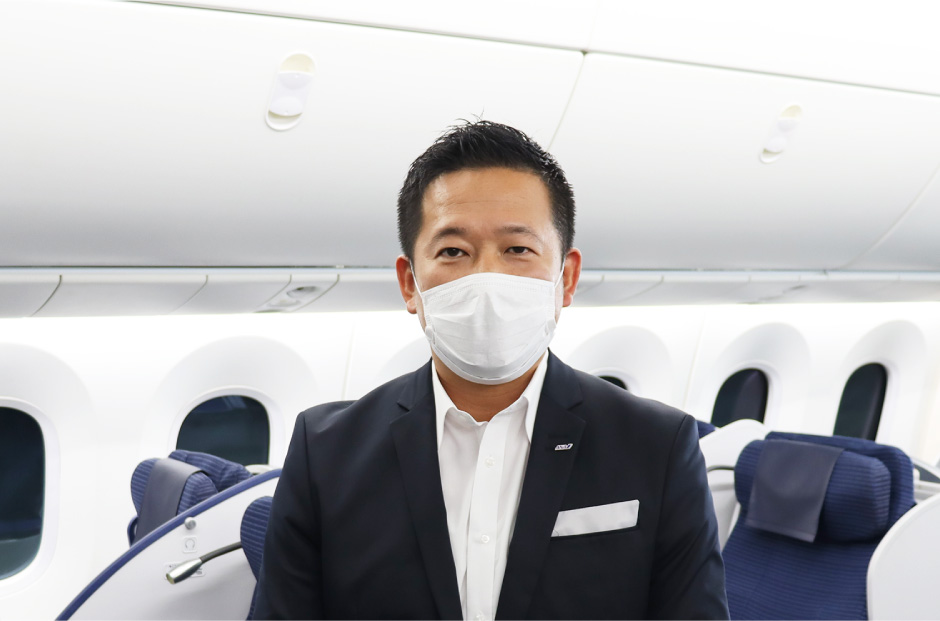 Traditionally in Japan, companies avoid talking openly about their goals due to the risk of not meeting them and being seen as irresponsible. Over the years, Miyata has upheld her belief that we should talk about our goals and do away with the common rigid attitude associated with them.

“In the integrated report we are finalizing, we discuss the ESG goals, activities and data ANA Group plans to deliver. I would like to share stories and messages of why,” she said.

So, what is cooking in ANA’s ESG oven now?

Bagasse refers to a dry pulpy plant residue, such as sugarcane or grapes, left after their juice has been extracted. For casual eyes, they look like they belong in a dumpster or bonfire.

For Ken Nishimura, manager of Product & Service Strategy, it was the answer to his search for a material that would enable ANA Group to reduce disposal of plastic in a significant way.

“Bagasse is waste unless it is processed and transformed,” Nishimura said. “I liked the story of creating something from the waste, too.”

Sugarcane bagasse is biodegradable, light, microwave/refrigerator safe and can be molded into difference shapes. It is an eco-friendly alternative to the disposable plastic trays many airlines currently use to serve food.

ANA began using paper straws and wooden stir sticks both in flight and at its lounges while also providing wooden cutlery with Economy class boxed meals on international flights.

In August, ANA will introduce food trays made of bagasse to its Economy class in-flight meals on international flights gradually. By simply replacing the plastic trays, ANA will be able to reduce disposable plastic use by 30 percent, an amount equal to 317 tons during the fiscal year 2019.

There had been only one trial use of sugarcane bagasse food trays by an airline in the past. For in-flight dining, containers have to be reheated and come with tightly-closed lids to avoid spillage, particularly onto passengers. Plastic seems to be the best option for this purpose and some airlines wash and reuse plastic food trays to reduce waste. 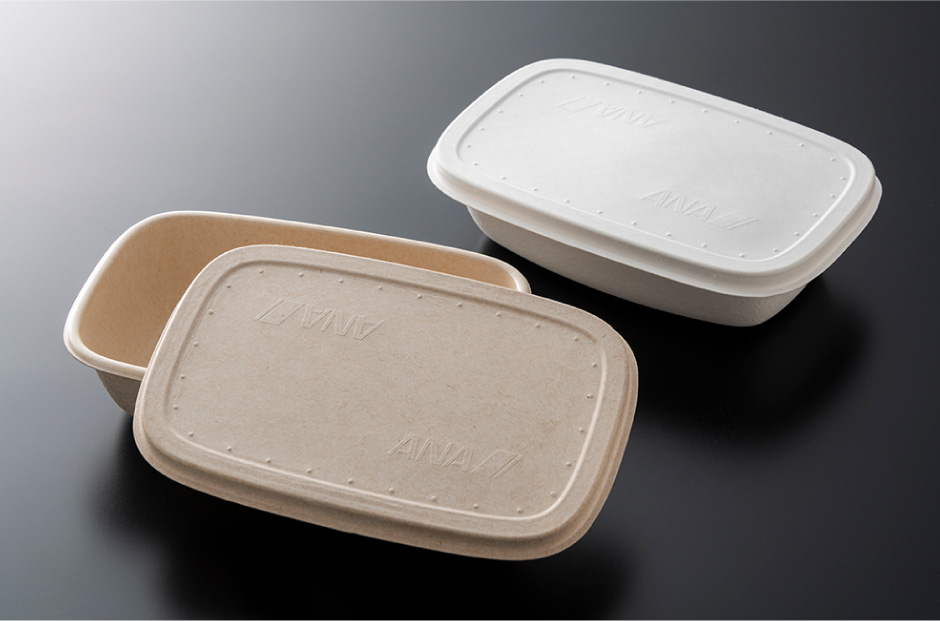 ANA food trays made out of bagasse.

Nishimura and his team opted out of reusing plastic trays. “It costs money to wash them,” he said. “And since our food trays are white, they would be stained after being washed multiple times.”

To Nishimura’s surprise, bagasse is not only eco conscious, but also budget conscious.

With the help of cabin attendants, the team conducted tests to gauge bagasse’s durability against heat and altitude in actual flights. And Nishimura did not compromise on the usability and aesthetics of the trays, either. At the end of the day, customer satisfaction is one of ANA’s top priorities.

“Most of all, we want our customers to get excited about the bagasse trays,” said Nishimura.

Miyata sees the work Nishimura is doing as a good way to engage with customers.

“We would like them to choose ANA based on our contribution to society,” she said. “It is more than just a concept; it is how we conduct business. We would like to be the brand that grows together with society by listening to its voices and concerns.”

The Product & Service Strategy team is going over the current list of resource waste to explore what else they should be tackling. Trash bags are at the top of the list.

Some plastic items will be reused, instead of being replaced, but the total elimination of plastic is something they foresee happening down the road.

Next time you are on board ANA flights, look around to find out what has changed. See what else ANA can improve to further its commitment to sustainability. One thing that will remain unchanged is our signature Japanese hospitality that prioritizes our customers’ safety, comfort and health.