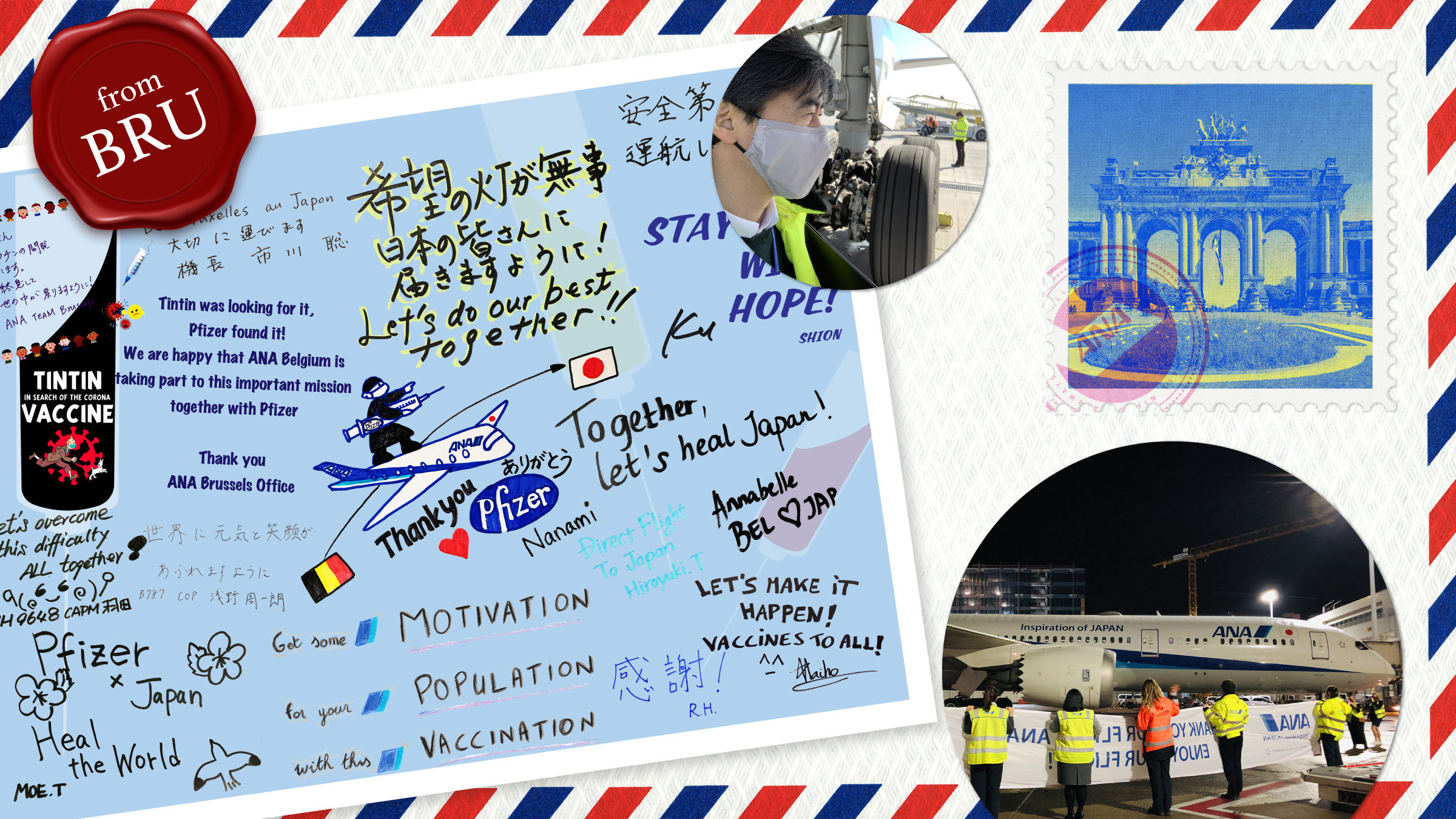 A New Chapter of Flight: In Conversation with Keiichi Ueda, Brussels General Manager at ANA

With the foundational efforts of our ANA Care Promise initiatives, ANA is resuming its regularly scheduled passenger flights to Brussels, Belgium (BRU) this month after being suspended for nearly a year due to COVID-19. Since the city office was established in 1990, ANA Brussels has been through multiple challenges, from the bankruptcy of a code-share partner, to a terrorist bombing, and a worldwide pandemic. Those experiences have instilled in the ANA Brussels team a strong sense of cooperation and resilience.

In an interview with Keiichi Ueda, Brussels General Manager at ANA, he provides some background on how the team has been thriving during these trying times and shares insight on what makes Brussels a COVID-era hub in Europe.

* The interview took place in February 2021.

Q: How have the Brussels flights been affected by COVID-19?

A: Our daily flights were suspended on March 27, 2020. We initially thought the suspension would last only a month or two. As almost everybody on the airport operation team went on leave, we asked them to check in a couple of times each month for updates on the latest developments. Meanwhile, sales and administrative staff members were busy processing all the cancelled bookings and implementing COVID-related guidelines at the airport office.

During the Christmas season, we operated eight flights between Brussels and Tokyo to transport expat residents to their home country. In preparation for those flights, we kept close communication with the top 25 Japanese corporate clients in Belgium to survey travel demands and feasibility. When Tokyo finally confirmed the flight dates, we were so happy and relieved to be able to serve the community. I asked the airport team to take a good care of our passengers, so that they would feel at ease despite the unprecedented traveling conditions.

Our Belgium market is small and close-knit. Our sales team knew many of the passengers on board, so we prepared a special recording, saying “welcome” and “thank you” in French, Dutch, English and Japanese, and handed it over to the cabin attendant team to be used for an in-flight announcement. I heard some passengers cheered when they recognized our voices. We felt joy and gratitude to be able to operate non-stop flights again.

Q: ANA Brussels has been operating the daily cargo flights since last November. How did it start?

A: We always thought Brussels could be a strong cargo hub for ANA. Along with Tokyo Narita Airport, we are one of the only two ANA gateways in the world that are CEIV Pharma certified. That means we, both facilities and staff, are equipped to handle temperature-controlled pharmaceutical cargo items.

I don’t think the cargo demands between Belgium and Japan have increased under COVID-19. It is just that less flights are operating now. Our first cargo flight took off on Oct. 13, 2020. Within a month, it became a daily operation.

We transport pharmaceutical and machinery products, as well as perishable products like chocolate, beer and vegetables to Japan. We also carry machinery from Japan as there are many European distribution centers in Northern Belgium. 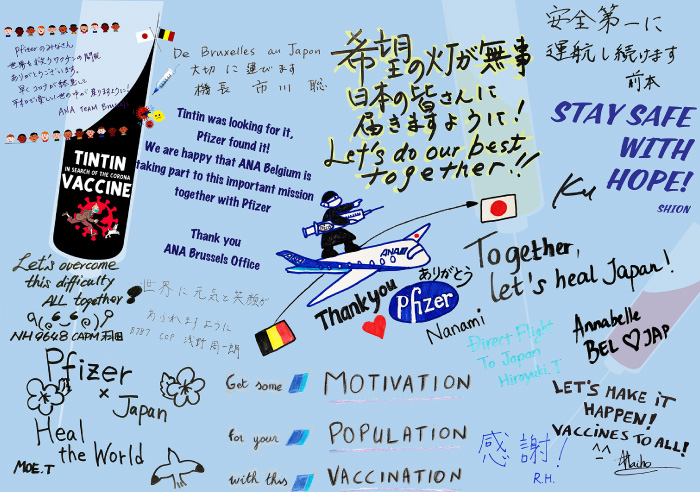 A thank you card to Pfizer from ANA Brussel employees.

Q: Speaking of cargo operations, ANA has partnered with Pfizer and DHL on distribution of the COVID-19 vaccine between Belgium and Japan. What has the process been like?

A: Yes, our managers worked tirelessly making the necessary preparations and coordination for this project. Everybody involved felt honored to be able to support Japan from Belgium. Our pilots were excited, too. It was like transporting a piece of hope. The team created message cards to Pfizer and DHL to express gratitude for our partners’ hard work.

Q: In your opinion, what makes Brussels a unique gateway for ANA?

A: Brussels is the capital of Europe, and it is the heart of European Union, both politically and financially. There are nearly 6,000 Japanese expats living in Belgium working mostly in the automobile and chemical industries. ANA is the only airline offering direct flights between Brussels and Tokyo and is the official carrier of the Belgium Olympic and Paralympic teams.

ANA opened a city office in Brussels in 1990 as we offered code-share flights with Sabena. After Sabena filed for bankruptcy in 2001, the Brussels office stayed open as an offline branch under the ANA Paris office. ANA finally launched non-stop service between Brussels and Narita Airport in October 2015, and then the city office moved to the airport to be merged with the operations team.

When the airport was bombed by a terrorist group in 2016, ANA was the first airline to resume its flight operations to Brussels.

Throughout its history, the ANA Brussels team managed to build a strong family bond. We are resilient, yet, dependent on one another. We have a diverse group of members here. There is a group of veteran members who have been with the company for decades. On the other hand, there are newer and younger members who joined the team after 2015. The veterans support the newcomers and enjoy seeing them grow into strong team players. As a testimony to their excellent teamwork, ANA Brussels won the ANA’s Way award, an internal competition to recognize good performance, consecutively in 2017 and 2018.

Q: How has Brussels been impacted by COVID?

A: Brussels Airport has been selected by the European Union Aviation Safety Agency (EASA) as one of the pilot airports for implementing operational recommendations related to COVID-19. The airport mandates wearing a face mask and follows social-distancing guidelines, and it is equipped with acrylic partitions, hand sanitizers and temporary hand-wash stations throughout the terminals. PCR testing is mandated to both arriving and departing passengers. The airport is not nearly as busy as it used to be, though. Restaurants and bars are not allowed to open. Many shops are closed, too, since there are not enough customers.

The same is the case for the whole city of Brussels.

Outdoor dining is not allowed either. Although the public transportation is up and running, people are mainly working from home. Residents are asked to shop alone, while museums are open for reservations only. It is definitely quiet in the city.

A: On March 6, we were able to resume weekly passenger flights from Brussels. We understand travelers choose ANA because we offer non-stop flights between Brussels and Tokyo. They rely on the safety and comfort we promise to them, and we cannot break the trust. We are grateful that we get to assist our passengers again. I want them to feel the Japanese hospitality from the moment they step up to the ANA counter at the airport.

The ANA Brussels team waves goodbye to a departing aircraft.