Three members of the ANA Group, Ayako Matsumoto, Naheel Dajany and Yukako Matsumoto share their stories on what it means to be a female professional in a traditionally male-dominated industry. Click here to read part 1 in this series.

Being a Woman in the Aviation Industry

Q: In your career with ANA, have you experienced moments that made you keenly aware of being female? If so, what were they?

A. Matsumoto: When I joined ANA, I was surrounded mostly by older men. When I transferred to the Beijing office, I saw women, specifically women who were mothers, assuming large responsibilities. It was such a stimulating environment for me, and I learned that being a woman does not make me special among colleagues. It is a normal occurrence. When I returned to Japan, I became the first woman to join the team that creates digital flight manuals for pilots. I asked my colleagues not to treat me like a woman. I realized that most people treat women delicately and that would prevent me from growing as a professional. I wanted to be recognized as a capable team member, not as the only woman in the office. 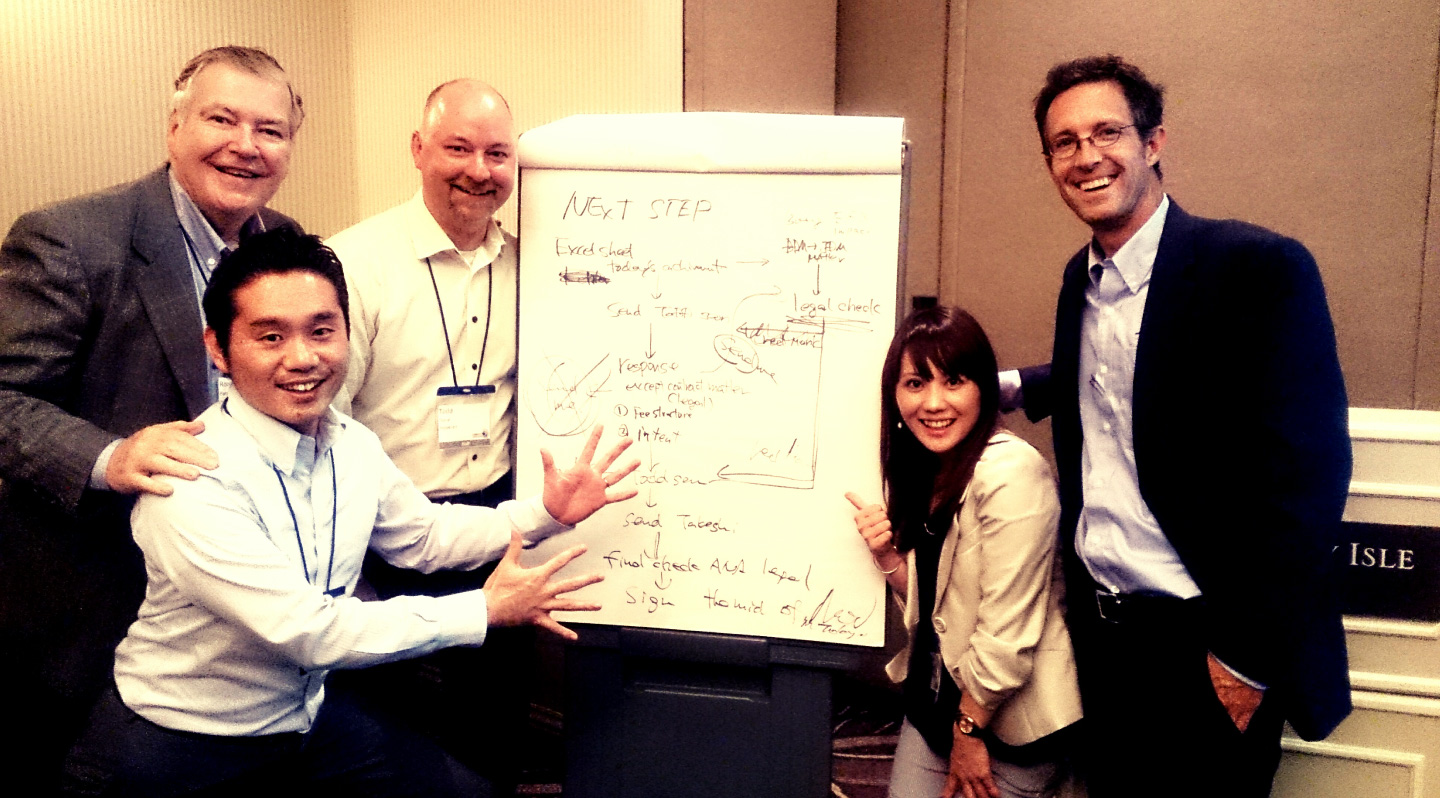 Ayako Matsumoto with partners from Jeppsen and an ANA colleague.

Recently, I have been fortunate enough to work with Mayumi Ejima, the vice president of Marketing Communication, through the ANA Space Project. She has guided so many female employees, particularly cabin attendants. She is nurturing, yet sharp and outspoken. I respect her and have so much to learn from her.

Dajany: I started working at ANA on a team in which I was the youngest member, the only non-Japanese person and the only woman. The combination of the three factors quickly made me aware that if I wanted to make an impact, I would have to do better than anybody else.

If you are persistent enough, and if you are able to convince others with logic and good performance, you can do whatever you set your mind to. Yes, there are challenges because I am a woman, but if I didn’t have those obstacles, I would not be successful. I do not see it as a negative thing, I see it as positive. I admire people who are able to make things happen while still being compassionate. Those are the people who have integrity and who are smart, but do not need to show it to everybody. 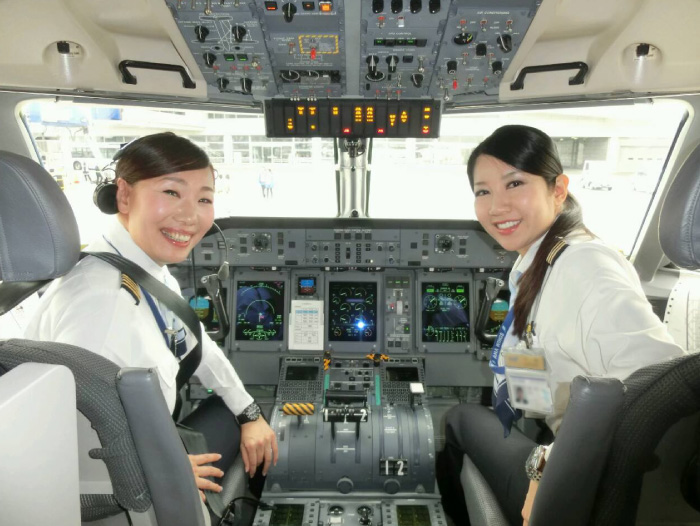 Yukako Matsumoto, left, with her co-pilot

Y. Matsumoto: I am not really conscious about the fact that I am a woman, but I believe my male colleagues are. There usually is a brief moment when we first meet that leave them speechless. They think, “Wow, it is a woman!” when they find out they are working with a female pilot. When we receive flight schedules, which list the names of crew members, many people only check last names and assume they are all men. They would automatically think, “I am flying with Mr. Matsumoto today,” then, they see me, Yukako Matsumoto, a woman, and they seem to need a moment to process it. It is simply because there are less female captains within the ANA Group.

I currently have six or seven DHC-8-Q400 female co-pilots, so I do occasionally get to work with them. I have to admit, it makes me happy to fly with female co-pilots. What we do as pilots is the same regardless of gender, but I do enjoy working with them.

Q: How would you rate the ANA Group as a female-friendly company? Do you have any advice to younger colleagues?

A. Matsumoto: I believe ANA knows the importance of good communication. Regardless of gender or age, we are encouraged to speak up. That’s what I have felt ever since I joined the company, and it’s what I love most about ANA. I believe the company is always willing to listen and give a chance to its younger employees. I would like to ask my younger ANA colleagues to be curious and to not be afraid of new challenges. If you ended up failing, the company will not hold it against you. The more proactive we are individually, the more successful we can be as a whole.

Dajany: In terms of being a female-friendly company, I think the ANA Group is already one of the advanced leaders among Japanese and global. ANA is on the right path. The Group is very serious about achieving the IATA 25by2025 goals and putting more women in senior leadership positions. The company also employs women in the underrepresented sectors such as mechanics and pilots. I personally do not like quotas because I believe that the best person should always get the job. However, without quotas, companies tend to lack the drive to look into these areas to see if they are really distributing the personnel and giving out opportunities equally. I would like to ask ANA Group to never give up on pursuing real diversity and inclusion, continue giving equal opportunities to all genders and people of all backgrounds. I would also like to ask the company to invest more into younger generations and create junior leadership positions. I think it would be nice if those in junior leadership roles would also include women and minorities. 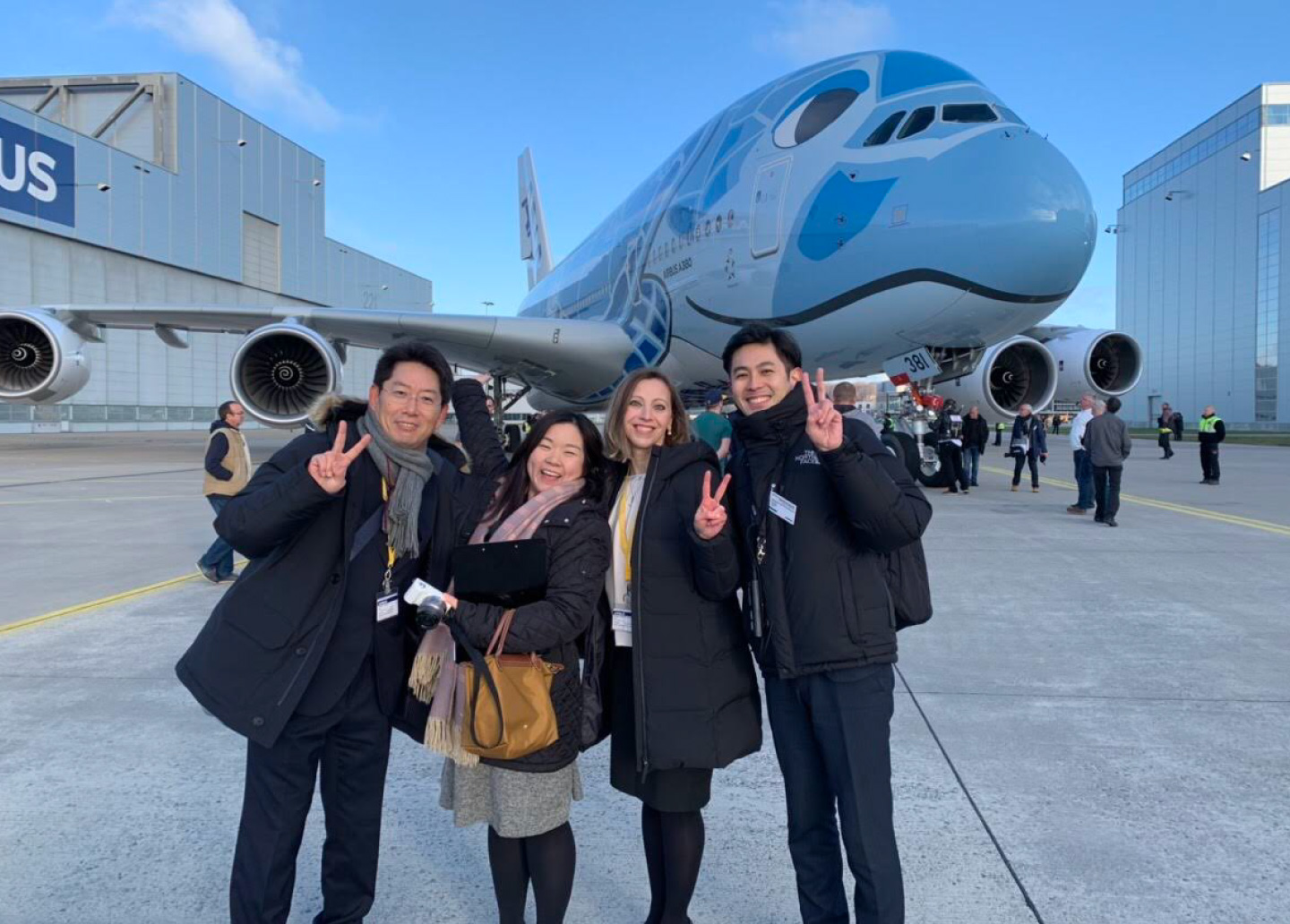 Y. Matsumoto: I think I can give the ANA Group a good score when it comes to being a female-friendly company. There are thousands of female employees, and the company is often highly regarded for having many women holding managerial roles. There is definitely a perception that flying is a male occupation, but the number of female pilots has been steadily growing. Approximately 35 out of nearly 2,000 pilots in the ANA Group are women. It is a good place for women to work. As with most companies, it is not perfect, but I feel we have a voice to speak up about what’s lacking. I would like to tell younger pilots that if you work hard, it will definitely pay off. Regardless of gender, being a pilot requires dedication. If you slack off, the quality of your work suffers. I want them to really understand and experience what hard work can do for them.

* All of the photos here were taken prior to COVID-19.