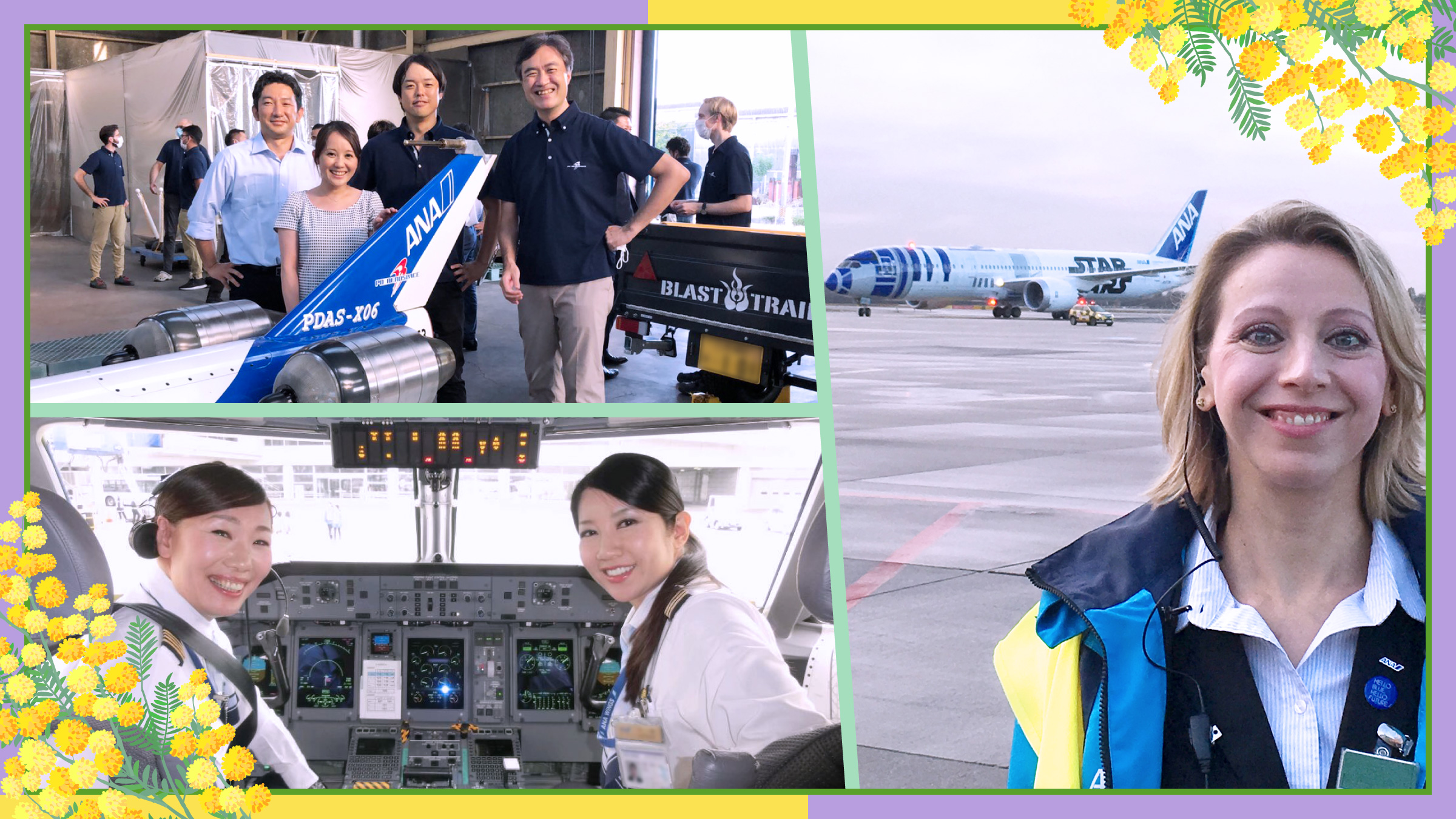 March 8 is International Women’s Day, a day when people around the world celebrate the social, economic, cultural and political achievements of women. ANA group has been one of the leading companies to promote diversity and inclusion, and last year, ANA strengthened its commitment by joining the International Air Transport Association’s (IATA) “25by2025” campaign. In an effort to bring gender balance to the aviation industry, IATA launched the voluntary “25by2025” campaign where its member airlines commit to improving female representation in certain areas of the industry by a minimum of 25% by 2025.

Three members of the ANA Group, Ayako Matsumoto, Naheel Dajany and Yukako Matsumoto share their stories in this two-part series on what it means to be a female professional in a traditionally male-dominated industry.

Q: What is your history with the ANA Group?

Ayako Matsumoto: In college I studied fluid dynamics, subdiscipline of fluid mechanics that describes the flow of fluids--liquids and gases. When I learned ANA was working with Boeing to develop the 787 Dreamliner, I became interested in working at the company. Initially, I applied to become an aircraft mechanic, but that did not happen. I joined ANA in 2008 aiding in flight operation support at Haneda, Narita and Beijing. Later on, I became a certified aircraft dispatcher. Then, I moved on to creating flight manuals for pilots.

In 2017, I won the grand prize at the S-Booster, a space business idea competition hosted by the Cabinet Office, for my idea to use satellite data to identify the best flight paths to minimize jet fuel carbon emissions. Due to this competition, I became involved with the ANA Space Project and started a new position in the Digital Design Lab in the following year. 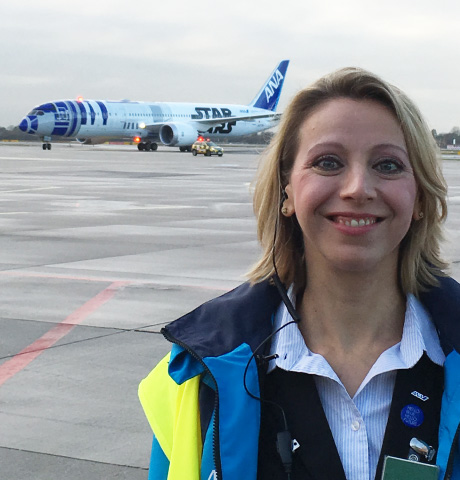 Naheel Dajany: I have always been passionate about aviation, so I started applying to work for airlines. I began working at ANA in 1992. At the time, ANA was opening a new route between Frankfurt and Narita. I helped to build up the Frankfurt office from scratch. In 2010, I was asked to join the ANA’s Headquarters (HDQ) globalization team, and I traveled back and forth between Frankfurt and Tokyo. In May 2011, I moved to Japan on a one-year assignment to work in the airport operations. We conducted benchmarking projects, looked at connectivity and hub models, and introduced new and effective ways of maintaining our operations. I simultaneously led the international quality team.

After coming back to Germany, I continued to work at Frankfurt Airport as the Deputy Station Manager. Meanwhile, I still worked between Frankfurt and the HDQ. In 2014, I moved to Dusseldorf to build up another new route there, which was a big challenge because we had only three months to start the operation. I introduced a new handling model to rely more on outsourcing and succeeded in improving the team’s efficiency and performance. Finally, in 2017 I was transferred from Dusseldorf to Japan, as the first non-Japanese expatriate moving from an overseas branch to the HDQ and joined the Corporate Communications team. Most recently, I joined Alliances & International Affairs in 2019 as Senior Director, and I have been there ever since.

Yukako Matsumoto: I’ve always loved driving and was looking for a job that enabled me to do that. Air Central, which is currently known as ANA Wings, was opening its doors to people who already have a pilot license. Since the company was headquartered in Aichi, where I am originally from, I decided to pay for my training, obtained a pilot license and joined the company in 2007. I became the first female captain pilot within the ANA Group in 2013.

Q: What does your current position entail?

A. Matsumoto: I currently am working on the ANA Space Project, which consists of three pillars: Remote sensing, space cargo and space tourism. I am involved in all three of those aspects. For remote sensing, I am working with JAXA (Japan Aerospace Exploration Agency) to develop a system to monitor greenhouse gases emitted from aircraft. I also work with Keio University and the ANA Systems, funded by the Cabinet Office and the Ministry of Economy, Trade and Industry to conduct experiments on how to forecast turbulences using Artificial Intelligence. For space cargo projects, we partner with Virgin Orbit on their LauncherOne operation in Japan. We are setting up the ground infrastructure in the Oita Prefecture so that the ANA Group will be able to provide the launch-pad service in the future. Lastly, we are coordinating with the Japanese government to create space aviation laws and regulations for space tourism. Without them, no Japanese travelers would be able to partake in space tourism. It is my job to oversee all of those projects and assess the ANA Group’s business opportunities in space.

Dajany: My responsibilities are joint ventures and partnerships in Europe, as well as relations with International Civil Aviation Organization (ICAO), IATA, Association of Asia Pacific Airlines (AAPA), Star Alliance and more. Before COVID-19, my team looked at our growth strategies, especially in Europe, as we were preparing to launch five new routes in the region. Since COVID-19 hit, I am unfortunately not traveling anymore to physically visit our partners. However, I can now meet with our partners all over Europe in just one day virtually.

We are mainly talking about how to restart aviation, discussing plans on how to build back the industry and how to overcome this crisis in the best way. We exchange best practices, talk about how COVID-19 is affecting travel in each country, discuss travel restrictions, brainstorm what we can do as airlines to make customers feel more comfortable and explore what we can do to work with the governments when it is safe to open up borders again. The work is interesting and very rewarding, but I do miss traveling.

Y. Matsumoto: I fly the DHC-8-Q400, a turboprop aircraft, with a capacity of 74 passengers. The past year has been a bit irregular due to COVID-19, but I typically operate about 700 flights per year. Now that I am in a managerial position and serve as a group leader of the ANA Wings Flight Crew department, I supervise a group of 30 pilots and manage daily operational reports. Additionally, I conduct route trainings. I work five days a week, flying 3-4 flights every day.
My favorite part about flying is the incredible view from the flight deck. The weather changes every day, sometimes every hour, which constantly provides us unique views. It also challenges me to come up with different flight patterns.

Q: What are some of your most memorable experiences at the ANA Group? 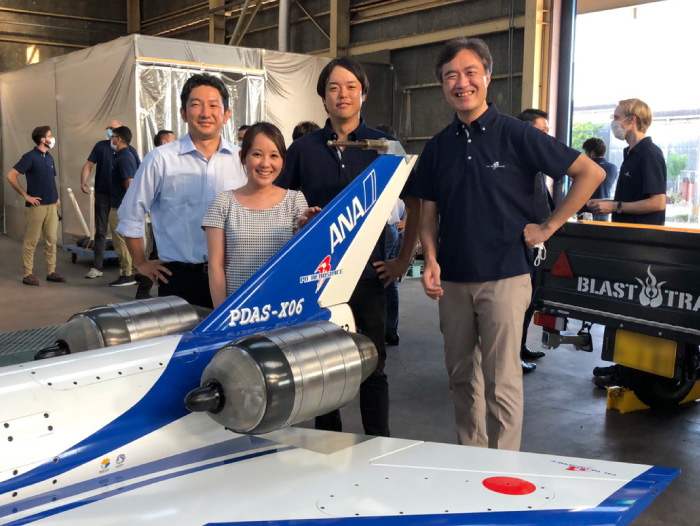 A. Matsumoto: I am actually working on one of my passion projects right now, which is to forecast turbulences. It is not easy to predict turbulences accurately, but it is a crucial tool for our flight operations. We get turbulence forecasts from the Meteorological Agency, but it is not quite up to ANA Group’s high standards. I met with a professor at Keio University to talk about creating a new forecast system and together, we came up with the idea of visualizing wind forecast and satellite data with image analysis. This is something no one has ever done before, and we are currently applying for an international patent. Artificial Intelligence can help identify those data images and find patterns of how and when turbulences are formed. We are getting closer to proving its accuracy and I am so excited to see our hard work finally paid off.

Dajany: My most memorable and rewarding moments were when I overcame the most difficult challenges. As my mom always tells me, I never pick the easy way.

One of my most exciting moments with ANA was in 2014 when, after just 3 months, I was able to build a team in Dusseldorf and start the new operation between Narita. Everyone on my team contributed and supported me to help make this happen. Given the short preparation time, it was challenging to introduce the same standard of airport operation processes that ANA implements worldwide to ensure safety and comfort of our customers.

The second moment was when I moved to Japan in 2017. I had to deal with several new factors at the same time: navigating a new country, a new position at work and moving from airport operations to corporate communications. At the same time, I started studying for an executive MBA program. I was pushed to my limit with no days off and free weekends, but it was very rewarding at the end, as I managed to successfully overcome this demanding period with results that exceeded my highest expectations.

Y. Matsumoto: In 2010, we had three DHC-8-Q400 painted green as a special delivery. We held a showcasing flight event at Chubu Centrair Airport. This was the first time I flew simply for passengers to enjoy the scenery. The DHC-8-Q400 is a smaller aircraft to begin with, but I was really able to feel close to the passengers that day and it was a great experience for me. 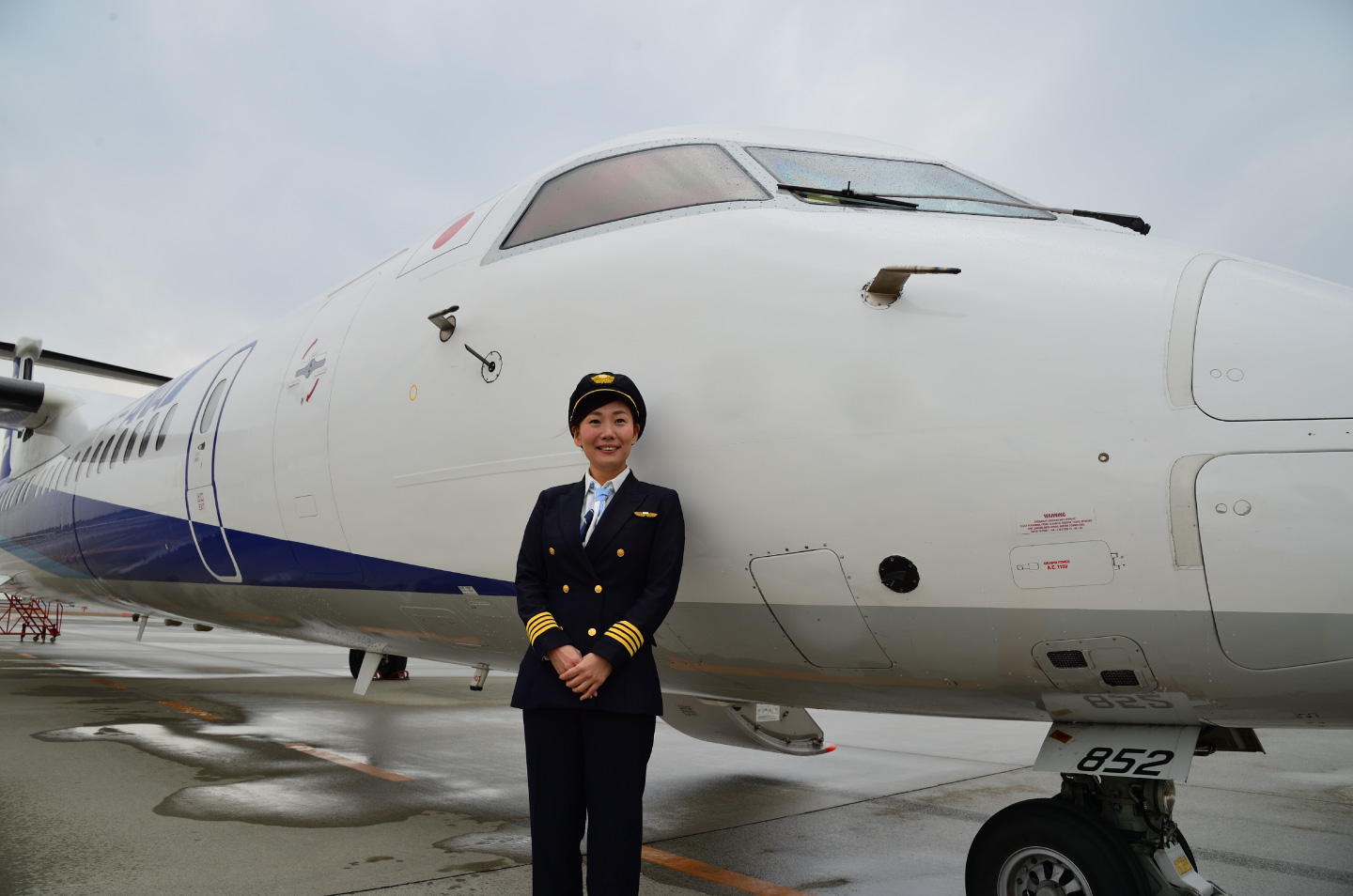 In part 2 of this series, we will hear more from them about being a woman in the aviation industry and advice they would give to their colleagues.

* All of the photos here were taken prior to COVID-19.